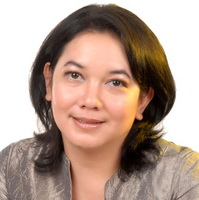 Agnes Irwanti is a professional that also involved as entrepreneur in the field of Information and Communication Technology. She once studied Electrical Engineering up to the 5th semester in Universitas Negeri Yogyakarta, before moving to Jakarta to work and finalize her bachelor degree for Management in the Faculty of Economics – Universitas Indonesia; Master of Science in Human Capital and Knowledge Management – Universitas Indonesia; and currently is PhD candidate in School of Business – IPB.

Agnes is active in professional organizations that have a positive impact in the community; Institute of Electrical and Electronic Engineering as executive committee member IEEE Indonesia Section and on in the Women in Engineering; IPAD (IoT Program for Agricultural Development) as one of the initiator & team experts. Agnes was nominated as one of the “Most Inspiring Women in Engineering” in Asia-Pacific by IEEE Region 10 (2011). Expert reviewer in “She Will Innovate Competition” by ASHOKA – Change Maker & INTEL (2012). Frequently, she was appointed by Indonesia Government as Indonesia Delegation to attend International conferences, such as APEC Women & the Economic Forum (2013, 2011), APEC Women Leaders Conference (2009, 2010) and APEC Women in Economic Summit (2011), as well as invited as International and National speaker and lecturer; CEO Forum in School of Business IPB (2016; 2018); Keynote Speaker on Women in Engineering Summit 2016 in Bangalore – India. She also was one of the Authors in the book titled “Gender dalam Ilmu Pengetahuan dan Teknologi” (Gender in Science and Technology), published by the Indonesia Knowledge Agency (LIPI) press (2018).