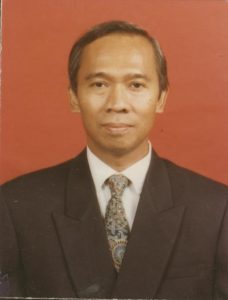 Dr. Arifin NUGROHO graduated Bachelor of Electrical Engineering from Bandung Institute of Technology, Bandung Indonesia,  in 1972 ; Diplome Etude d’Approfondie and Docteur Ingenieur, both in Traitement de l’Information,  from Universite de Rennes 1, France, in 1981 and 1984,  respectively. He begun his career as a radio engineer for Planning Group of PT Telkom, in 1973, until he left the company for graduate study in 1980. Before he left, he belonged to the planning group for radio relay links and satellite system. In fact that was the moment when PT Telkom has started to operate its Palapa(A) Domestic Satellite system, being the third geostationary satellite system- after Telesat Anik and Westar-Western Union- to be operated for national purpose . This is followed by Palapa B system, consisted of series of 24 transponders C band with dual polarization. When he returned to the company in 1985, he joined the research group for telecommunications network, working for the migration from totally analog public switch telephone network, to a digital telephone network, and to finally ISDN. He also engaged in the analysis of quality of service of the whole PSTN of PT Telkom. In 1986 he directed rain measurement campaign for characterizing the Ku band radio signalm with the aim of exploiting it in the future Palapa series satellites.  For the second time, he joined the satellite planning group for designing the  Palapa C satellite which used C and Ku band payloads. Then he was promoted the Head of R & D Division of PT Telkom in 1988. In 1996 he was engaged as Project Manager of Telkom-1 satellite system, a satellite, launched in 1999, operating at whole 800 MHz bandwidth at C-band with dual polarization. He left for retirement from TELKOM in 2004 and started his own consulting firm for telcommunications system, especially for radio regulatory and technical matters, including satellite systems. He then extended the portfolio of his area of intersts into content business, frequency spectrum management, maintenance of radio system, and wireless LAN issues. After founding in 1999, he assumed the chairmanship of Indonesian Satellite Association till 2005. He wrote numerous papers including research works, and is still giving lectures in various universities for computer networks, satellite networks, multimedia management , stochastic processes and queuing theory. He hold as well a new profession as consultant to government in regulatory and technical aspect of communication radios and to various telecom and satelite companies. He is the Member (M, 1986), Senior Member (SM, 2014) and Life Senior Member (LSM, 2018) of IEEE, and of AIAA from 1990 to 1994.  During 2011-2015 period he has actively assisted PT CSM VSAT Company in Filing the Orbital Slot for Ka-band to the ITU-R, as well as designing the CSM Ka-band High Throughput Satellite. Then in 2015 henceforth he has created UNISAT Satellite Company — in which he assumes a CTO-ship — a company which serves the corporate communications based on VSATs.   In the course of time, under his guidance, the company pursues its new business portfolio in the High Throughput Satellite communications, in collaboration with the INTERSPUTNIK.  Such a system is conceived to be launched circa 2022 at the latest.

In the meantime, Nugroho is actively participating – as a Drafting Group Chair —  in the Asia Pacific Group Conference (APG-19) for preparing the WRC 2019.